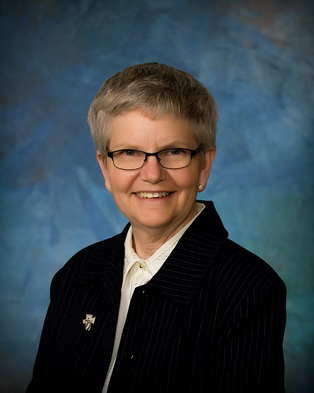 Before entering Presentation Convent in August of 1984, Sister Pegge received an Associate Degree in Computer Data Processing, worked in data processing and accounting for First Wisconsin Corporation, a bank holding company of Wisconsin’s largest bank for 11 years, ran for state assembly in the 4th Congressional District – the only woman ever to run in that district. Sponsored by the O.F.M. Conv. at St. Josaphat Basilica, Milwaukee, Wi, Sister founded the Secular Franciscan Order in Tlacoachistlahuaca, Guerrero, Mexico, living with the Presentation Sisters at that mission from 1981-1984.

During her second year novitiate, Sister Pegge interned with NETWORK (A National Catholic Social Justice Lobby) in Washington, DC. After earning a bachelor’s degree in theology from Creighton University, Omaha, NE, she became director of the Catholic Rural Life Office for the Diocese of Sioux Falls. She later served as director of the Grassroots Rural Ministry for the National Catholic Rural Life Office in Des Moines, IA. She furthered her education at St. John School of Theology, Collegeville, MN, earning a Masters of Divinity Degree, which prepared her for rural parish ministry. She served five years at St. Lawrence Catholic Church, Milbank, SD as their Pastoral Assistant and then served five years with Sr. Darlene Gutenkauf in a rural outreach congregational ministry in Timber Lake, Isabel and Trail City.

Upon returning to Aberdeen, she served several years in Pastoral Hispanic Ministry in Aberdeen area. She served one year as Vocation Director and Director of Evangelization for St. Lawrence, Milbank, SD.

Reflecting upon her vocation, Sister says, “By the merciful love of God, I have the humble privilege of serving those made poor, who constantly remind me of my own poverty and neediness. By the grace of God and the graces of this vocation, I am who I am – sinful and gracefilled.”