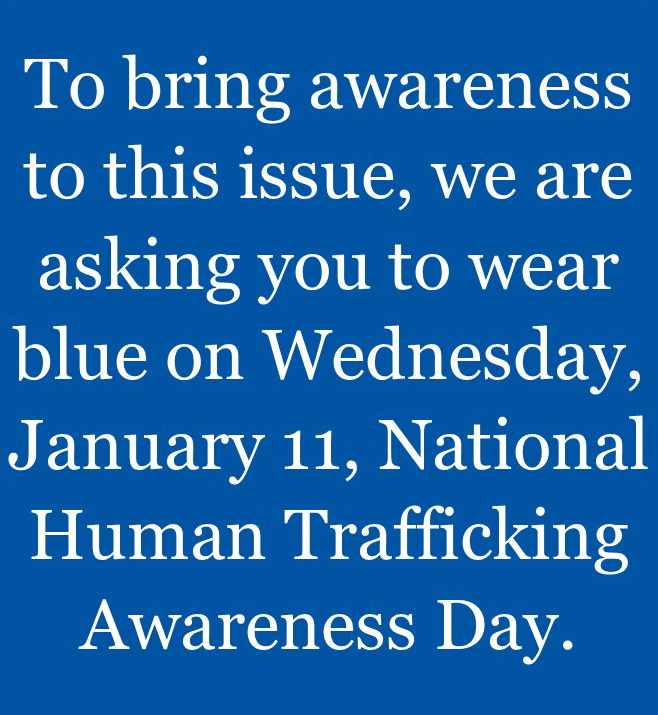 This month is set as a time to bring special attention to the continued injustice of slavery and human trafficking in all their forms. Though illegal in all countries, it is estimated that more than 40 million people are being trafficked. Traffickers make billions of dollars every year.

In 2021 (the last year of full data) there were 100 contacts to the National Human Trafficking Hotline about human trafficking in South Dakota. Through those, 29 cases with 63 victims were identified. That may seem like a small number to some, but per 100,000 people in the state, it places South Dakota #2 in our region, second only behind Nebraska in per capita cases. “Human trafficking is the business of stealing freedom for profit. In some cases, traffickers trick, defraud or physically force victims into providing commercial sex. In others, victims are lied to, assaulted, threatened or manipulated into working under inhumane, illegal or otherwise unacceptable conditions. It is a multi-billion dollar criminal industry that denies freedom to 24.9 million people around the world.” https://humantraffickinghotline.org/en

We also ask that you include the victims of human trafficking in your prayer:
God of the Universe, bless our movement to protect the vulnerable and the unsuspecting from all forms of exploitation, and in particular, from human trafficking.  Keep us mindful of your presence in our lives and of our duty to be there for others, for we are all one.  May Your will be done.  We pray this in Jesus name.  Amen

The Presentation Sisters are one of the sponsors of the US Catholic Sisters Against Human Trafficking. The website US Catholic Sisters Against Human Trafficking includes education, study modules and more to help inform readers about human trafficking. Monthly newsletters are available and provide a wealth of information on many facets of trafficking in the United States and across the world. CLICK HERE to review and read their newsletters.  We have included information below about specific issues surrounding Human Trafficking, follow the links in the sections below.

Human Trafficking is a complex issue with complex root causes. Contributing to trafficking are a variety of factors that may not seem connected at the outset. The US Catholic Sisters Against Human Trafficking website lists the following factors—systemic racism, neoliberal capitalism, gender inequality, climate change, poverty, forced migration and war & conflict as root causes. All are part of “an interconnected web of social injustice and human apathy”.
(USCSAHT Brocure-2021).

Signs someone is being trafficked

It is critical that we learn the signs that someone is being trafficked. Often, this is the only hope a victim has of being rescued. Since human trafficking is often a crime that is hidden in plain sight, it is important to be aware of its warning signs. Some indications that a person may be a victim of human trafficking 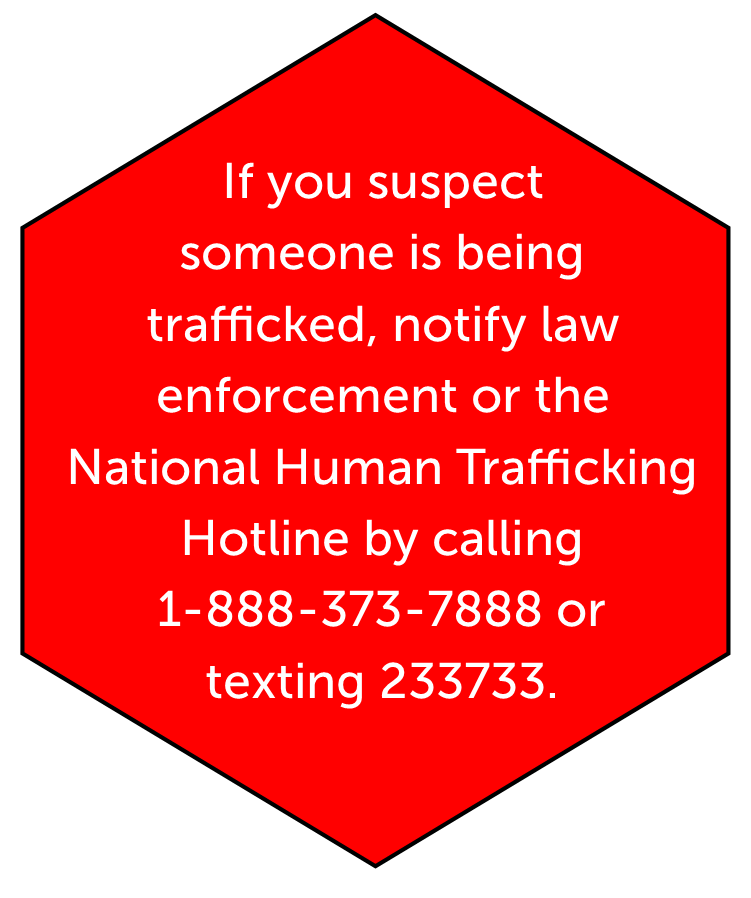 include (especially in the case of women and children):

If you suspect someone is being trafficked, notify law enforcement or the National Human Trafficking Hotline by calling 1-888-373-7888 or texting 233733.

By its very definition, the crime of human trafficking involves people participating in some activity against their will.  Often those activities are illegal – prostitution, selling drugs, shoplifting – and trafficking victims are arrested and charged with a crime. This tragically ironic scenario is extremely common – a survey found that 91% of survivor respondents had a criminal record as a result of being trafficked. A criminal record, even an arrest without a conviction, often leads to doors being slammed shut.  It’s harder to find a job, rent an apartment, and otherwise rebuild a life after breaking free from a trafficking situation. (from www.polarisproject.org )

National Human Trafficking Awareness Day is recognized each year on January 11th. In recognition of this important day, and throughout the month of January, Blue Campaign hosts several special events and educational activities.

Blue Campaign’s largest initiative is #WearBlueDay on January 11th. To raise awareness of human trafficking, we invite the public to take photos of themselves, friends, family, and colleagues wearing blue clothing and share them on social media – Facebook, Twitter, and Instagram – along with the #WearBlueDay hashtag. Anyone can participate, all you need is a piece of blue clothing!

Native Americans are victimized by human trafficking at rates higher than that of the general population. Though statistics are few and far between, testimony from experts, activists, and tribal leaders – as well as independent investigations – have revealed a disproportionate impact. In a study conducted at four sites in the U.S. and Canada, “an average of 40 percent of women involved in sex trafficking identified as an AI/AN or First Nations,” yet Native women represent 10 percent or less of the general population in the studied communities. (https://humantraffickingsearch.org/traffickingofnativeamericans/). InterAction, an organization of NGO’s across the world, believes that trafficking of indigenous people is an often overlooked casualty. (https://www.interaction.org/).

Over half of children trafficked have family involved. These cases most often involve parents, but grandparents, aunts, uncles, and siblings can also be involved. The National Human Trafficking hotline (https://humantraffickinghotline.org/) reports that a family member is the second most common way that a person is recruited into sex trafficking and the fourth leading entry into labor trafficking. In some cases, families unknowingly enroll their children in ‘training or education’ opportunities which are actually fronts for labor or sex trafficking. In other cases, the adult is aware of what they are doing and trade the child for goods or services, often drugs.

According to Norma Rendon, Ogalala Lakota, and founder of ‘Where All Women Are Honored’ in Rapid City, S.D., Native Americans are especially vulnerable to this form of trafficking. A variety of historical reasons contribute to this tragedy. The organization works to shelter women and children who have been victims of trafficking, sexual and domestic abuse. 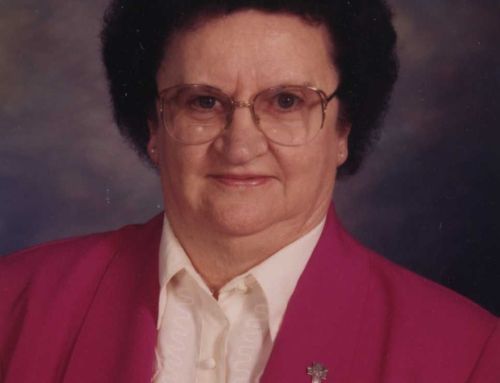