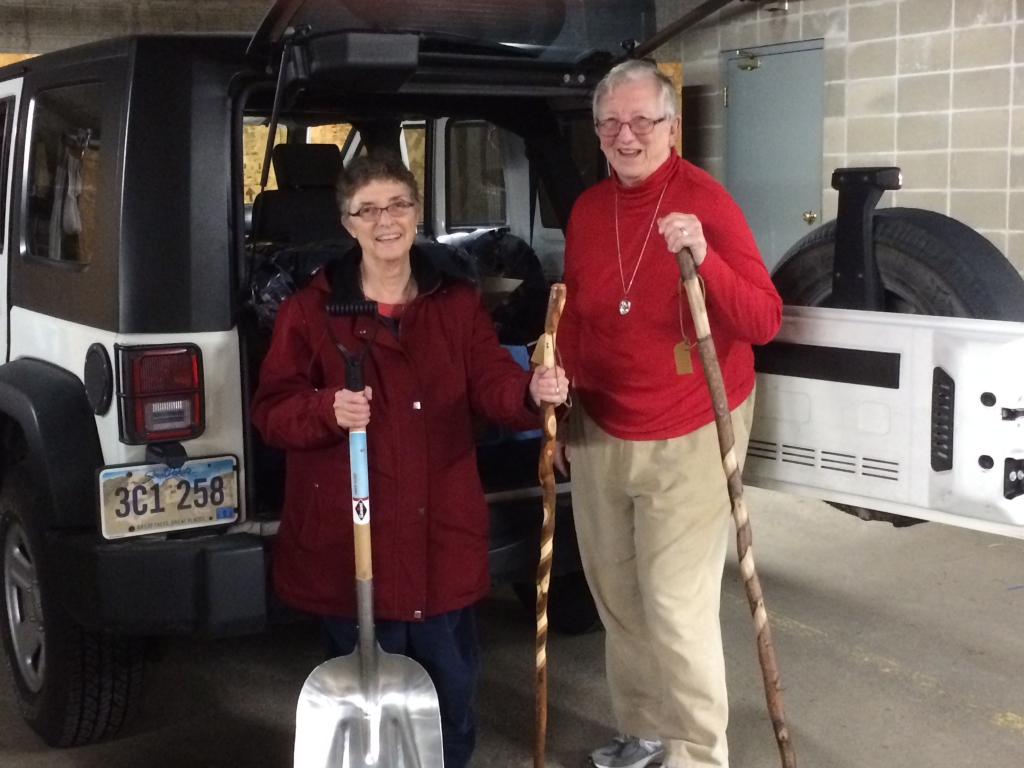 Sister Joanna Bruno (left), from San Francisco, and Sister Liz Remily (right), from Aberdeen, packing the jeep for the trip to the Standing Rock Reservation.

It was a flash-in-the-pan idea to travel to the Standing Rock Reservation to help the water protectors and indigenous people in Cannonball, North Dakota. During the days of the Novena for Presentation Day, we felt it would be what Mary was calling us to do. Daily news of the demonstrators on TV and front page news in the local paper were drawing us to go, thinking, “They must need supplies by now.”

We found that the demonstrators were needing many things but it was the top two things that we gathered: fire wood and sleeping bags that would protect in zero-below weather.

Sister Liz Remily from Aberdeen and I, Sister Joanna Bruno from San Francisco, started looking for the requested military sleeping bags at the Army Surplus in Sioux Falls. We found them beyond our budget so we looked in other places and found a deal at Nyberg’s ACE Hardware. Zero-below sleeping bags, perfect! Firewood was easy.

We planned to leave the early morning of Thanksgiving weekend. The day before Thanksgiving our neighbors and sponsors, Aberdeen Presentation Sisters Janet Horstman and Sheila Schnell, helped pack the Jeep and our own supplies. Since we had just had our first blizzard a few days prior we wanted to be prepared for sleeping in the Jeep if we got caught between blizzards. With Jeep packed with wood, sleeping bags including our own, walking sticks, medical supplies, food, maps, and lots of prayers from the sisters in California and South Dakota, we started off with a loaded vehicle.

Fast forward five hours and 450 miles to Mobridge the last supply line to the camps and crossing the Mighty Missouri River where Louis and Clark made their notable canoe trip, we crossed into Standing Rock reservation using 1806 heading north taking in the sight of the beautiful Lake Oahe. All along the two lane country road we saw land that had already been dug and large blue pipes laid. Large digging machinery was standing by to be employed. The last 10% of the pipeline needed to be stopped. The Missouri River has no voice but our own. The unborn generations of children to come had no voice either.

After 90 minutes we reached a fork in the road. One sign said, “Camping.” We took the one that said, “NO drugs, NO alcohol, and NO arms.” We were later greeted by a young man who asked if we were bringing food. Regretfully we answered, “No, we’re sorry, food wasn’t on the list. We have sleeping bags and firewood.” “Good, we need that also.” He pointed down the hill to where we were to leave off our donations. We were dumbfounded at the size of the camp, of which there were three. Indian tents, Yurts, geodesic domes, tents for summer camping, SUV, pick-up trucks and all sorts of shelters, few of which were ready for the coming Dakota winter, were crowded together making little room to drive through. The youngest child we saw was about five years old!

We found the distribution area where a young 12-year-old boy was chopping firewood with an ax, obviously trained and confident. Coming towards us, he said, “Can I help you? What did you bring? O good, we were running out of wood. Thanks” Shortly after that, a young woman came to help us unpack the sleeping bags. “Where is the medical tent?” “Right over there.” But “right over there” was in an area we couldn’t bring the Jeep, so Elijah, our 12-year-old, carried the box of exam gloves to the EMT tent. 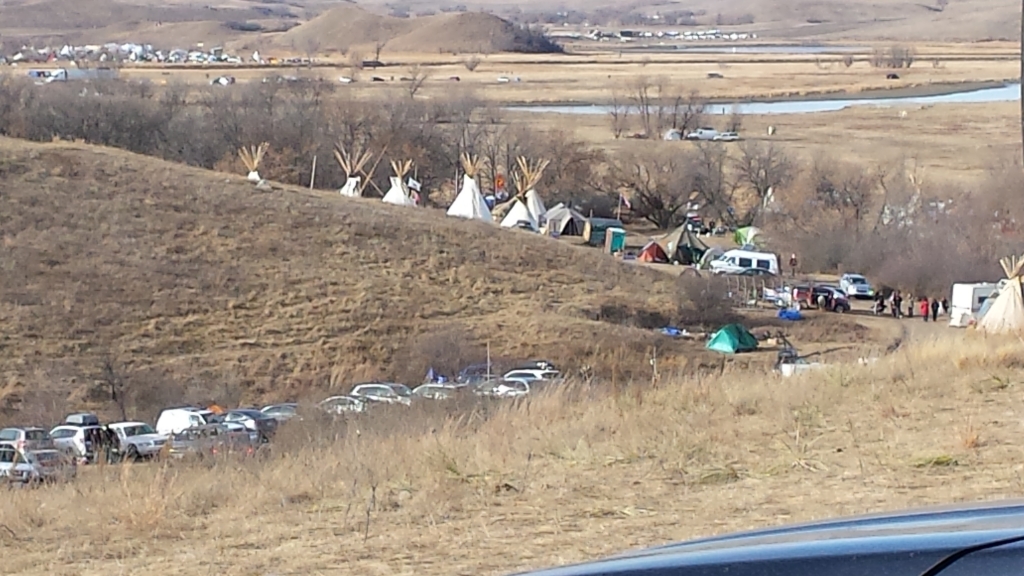 Turning the Jeep around on a dime, we saw that an Indian woman was right behind us ready to pick up what the other camps needed. Once parked we wandered around meeting some of the people, a mix of ages, professionals of all kinds, labors of all strips building temporary shelters for the winter. Everyone was helping each other out, especially the newly arrived of the community, for the camp had become a community. There were no dogs that we could see, only horses. No radios or loud noises. Only in the distance we could hear Indian drums. It was almost a monastery-like silence. The camp of the seven councils (Oceti Sakowin) stretched out in the distance. This was the longest, largest Native American protest in modern American history. Along with the Lakota and Yankton Sioux were thousands of Indians representing over 200 tribes from North and Central America, along with environmentalist seeking to halt the completion of the 1,172 mile pipeline that runs from the North Dakota Bakken oil fields through South Dakota and Iowa, carrying crude oil to Illinois.

It was encouraging and inspiring to see so many young and courageous people standing up for the earth and Indigenous rights. We had brought so little in comparison to what these folk were bringing. How could people ever think of a plan to pass a pipeline of crude oil through the Missouri and Lake Oahe? Engineers tell us, “All pipes leak at some point.” Why would we risk drinking water? Are we looking to be another Flint, Michigan? We can go to the moon and return safely to earth. How can we not figure out a way to move oil from point A to point B without sacrificing sacred lands and contaminating drinking water?

If we are willing to rape indigenous sacred lands then we would be willing someday to run a pipeline through the main aisle of Notre Dame Cathedral. On this Thanksgiving weekend, we prayed for all we have been given and all that we hope to pass on to the coming generations. Standing with Standing Rock was a privilege and an honor. Sitting Bull reminds us, “Let us put our minds together and see what kind of life we can make for our children.” 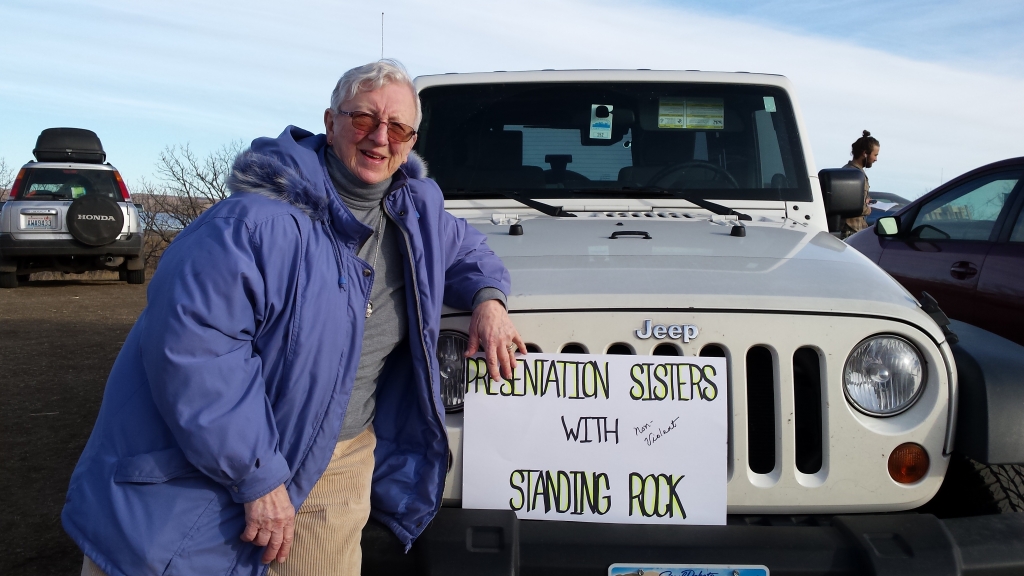 Sister Liz Remily from Aberdeen representing all the Sisters of the Presentation at Standing Rock. 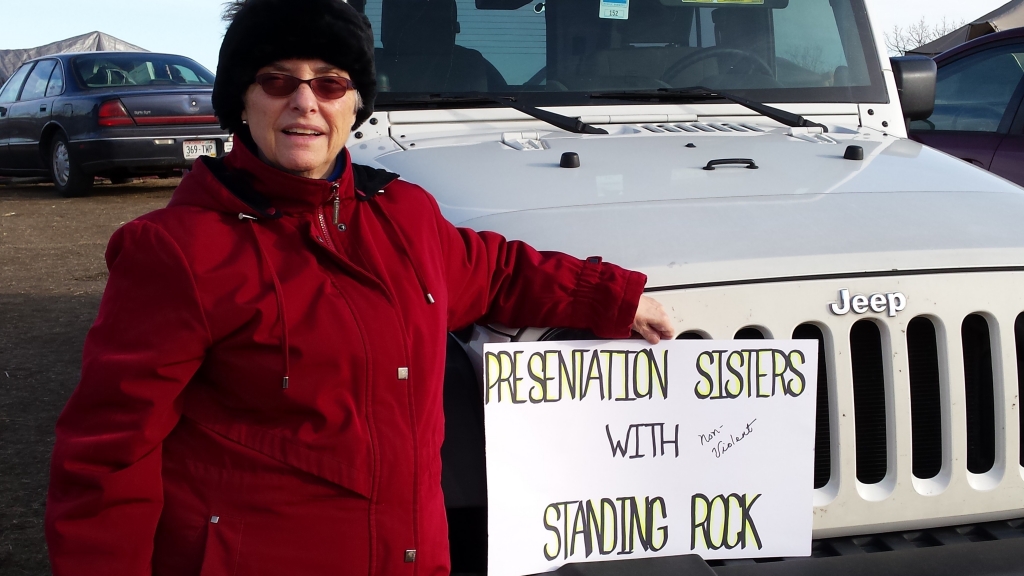 Sister Joanna Bruno from San Francisco, holding the make shift sign on behalf of all the Sisters of the Presentation.