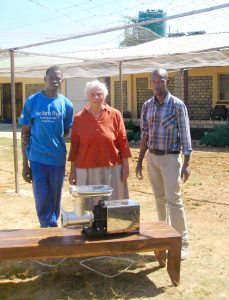 L-R: Mboma, farm manager, myself, and Mr. Musonda with an electric mincer we will use for producing our fish feed pellets

In my last communication, I wrote about the saga of dealing with the stolen fish feed supplement needed to begin our project with Prairie Aqua Tech in Brookings, SD. A number of you have asked how things are going now.

Once we recovered the stolen protein supplement to add to local ingredients, which took about a month, we thought we’d soon have the project underway. Well, this is Zambia where nothing happens quickly.

We first needed to empty and clean the two ponds to use for the research project. Both were partially covered with red algae, which had to be removed. To do this, we attempted to purchase copper sulfate. It took weeks before we were able to locate a place that handled it. For another three weeks, Mboma, our farm manager, sprayed the ponds periodically with a mixture of copper sulfate with no success. Finally, we removed all the fish and water, sprayed again and most of the algae disappeared. We filled the ponds with water from another pond, which contained green algae that destroys red algae. The ponds were beautiful and ready to go, we thought. However, this is Zambia where nothing happens quickly.

When we emptied the two project ponds, the fish had to be transferred to another pond. To simplify the work, the male fingerlings…about 400…were put into a pond that is designated for male fish only. A month later, we were ready to transfer the male fingerlings and to begin our project. However, this is Zambia where nothing happens quickly.

I arrived at Nano Farm after the men had already begun transferring the fish. The net was filled with hundreds of tiny fish and I was told that 900 had already been put into the two ponds. I couldn’t believe it. Earlier, we had put only 400 male fingerlings into the pond with the larger male fish. What had happened? Of course I knew what had happened. Some female fish had gotten into the male pond and over the previous six months had produced hundreds and maybe even thousands of babies. The only option was to remove all the fish that were just transferred, empty the water from the ponds and begin again. This is Zambia where nothing happens quickly.

In April, Mr. Musonda, a new member of the Provincial Fishery Department, visited our ponds. He told us that the female fish probably entered the male pond when we transferred water from another pond. Some of the tiny fish probably slipped through the net placed over the pipe at the time of the water exchange. Mr. Musonda recommended that we put in additional pipes connecting each pond to the spring, which is the source of water for three of the ponds. This has been done and again we thought we were ready to begin the project. However, Mr. Musonda said we also had to do some work on the ponds so the correct depth of the water can be maintained. As you know, this is Zambia where nothing happens quickly.

During all the months we were working on the fishponds, we proceeded to gather the local ingredients necessary to add to the protein supplement, which had been sent from Brookings. We were unable to purchase two of the required ingredients. I contacted the team in Brookings to see if they could purchase them for us and send them with someone coming to Zambia.   However, the suitcase carrying the supplement had been broken into and two of the three packages were missing. So once again we began to search for a store that sells vitamin and mineral premix. This is Zambia where nothing happens quickly. 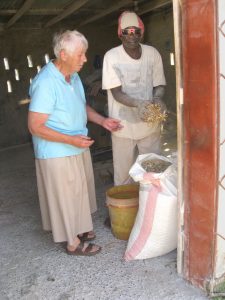 At the Hammer Mill we grind the kapenta (small fish) and rice paddy into flour.

Mr. Musonda volunteered to go to Lusaka and search for the needed ingredients. Fortunately, his mission was successful. With the feed secured and the ponds nearly completed, he informed me that by mid-June they will transfer the male fish and the project will finally begin. BUT…this is Zambia where nothing happens quickly. It is now mid-June and Mr. Musonda is now telling me that we should purchase some fresh fingerlings rather than using those that have been in-breeding for many years. This could take another month, for nothing happens quickly in Zambia.

We will be producing our own fish feed, which we anticipate will double or triple the size of our fish. All the ingredients for the feed must be taken to a hammer mill and ground into flour, mixed and put through a grinder. The feed is then formed into small pellets and dried in the sun.

We have made major changes in our fish ponds and hope this will positively affect the production of our fish.All in all, this has been a most positive experience. 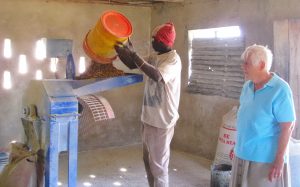 We are learning how to manage our fishponds. There is more to it than just feeding the fish every day. Soon we will be able to provide our local people with high quality fish, which is their main source of protein and also generate income to sustain our work with the poor. We are most grateful to    Mr. Musonda for the incredible amount of time he spent with us directing the work that has been done, securing the ingredients for the feed and for all we have learned from him.

Thank you for your interest and your support.