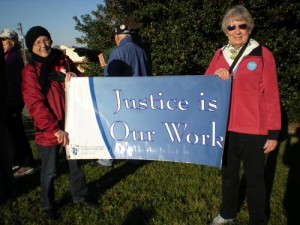 Thousands converged at the gates of Fort Benning, Georgia from in November to end the U.S. militarization of the Americas and to close the School of Americas. Sisters JoAnn Sturzl and Myra Remily traveled in the Veterans for Peace bus from Minneapolis. The following two articles are brief recaps from their experience this year.

View NCR article, At gathering, SOA Watch declares: ‘We’ve got to go to the border’

This was my 11th year of rallying at the SOA (School of the Americas) in Columbus, Georgia in order to close the school. It is a terrorist training school 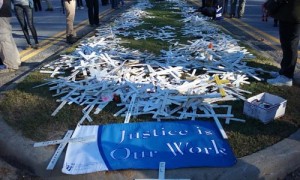 that has resulted in the assassination and disappearance of many innocent people in Central and Latin America. In the last two years, we (1400 people) also gathered at the entrance of the Stewart Detention Center in Lumpkin, Georgia operated by the CCA (Corrections Corporation of America.) This is one of the largest detention centers in our country; with overcrowding, lack of medical care, and spoiled food.

One of the most meaningful aspects of the journey has been the 24 hour bus ride with the Veterans for Peace from Minneapolis. In the past few years, there have been fewer Veterans for Peace and more young people on the bus, which gives me much hope. Some of them are children of immigrants from Central and Latin America. Another significant change that I’ve observed since my first time at the rally is the attention being given to numerous justice issues in our world today, which I’ve noticed in the various workshops at the Convention Center, the exhibit tables and the speakers at the rally.

On our way home, we discussed the reality that all of these justice issues are related. One man spoke clearly about his perception that the American “way of life” has a lot to do with the inequities and injustices in the world, which he believes is based on our taking disproportional resources. We are obsessed about our lives being more precious than anyone else’s. It’s a form of “exceptionalism.” It could be helpful to ask ourselves: “How can I use my privileged life to help improve the life of others?”

Many of us in our group experienced a sense of “bitter-sweet” as we departed, because this will be the last big rally there. The decision has been made to have only a small yearly gathering there. The SOA Watch, who have organized it for 25 years, decided (after consultation) to move the rally to the border next year. Part of this decision has to do with the reality that many of the border patrol agents are now being trained at the SOA (militarization of the border.) We, of course, feel very sad about this.

I’m grateful for the prayers and support of my Community during these years that I represented you at the vigil. What stays with me from this years’ experience is a desire to become more conscious of the common good and to live with more compassion. I hope to live Gandhi’s statement “be the change you want to see in the world.”

Travels of a Pilgrim Seeking Justice
by Sister Myra Remily

My pilgrimage began Wednesday afternoon to meet up with Sr. JoAnn. I stayed the night and the next morning we set out for Minneapolis, where we stayed with some friends, Greg and Rita

Corcoran. They are a couple who give their part in the SOA pilgrimage by giving us housing.

The next morning we boarded the bus to head for Fort Benning, Georgia to demonstrate against this military base that trains men (maybe women) military tactics that eventually are used against their own people in Latin America. Thousands have been massacred being aided by this base.

It took us 24 hours on the bus. Sr. JoAnn shared that part of our pilgrimage. As she also expressed that is to be our last trip to Georgia as the SOA is moving to the southern border.

I would like to share a bit more of the detention center we protested outside a town called Lumpkin. The center is located 1.7 miles from the center of Lumpkin. There was a short program in town sharing some of the atrocities that take place in these detention centers that are scattered around the states, this particular one (Stewart detention center) is the largest. Georgia has two more and one other one to be built. After the short program 1400 of us marched up the hill to the detention center singing and chanting justice phrases as we went along. We all crowded as close to the gate as we could and clapped and hollered as loud as we were able to let the detainees know we were there to give them support and courage.

These detention c enter conditions are extremely abusive. The food worming and they get very little, Very poor health aid if any, a phone card costs double or triple of what we would pay. So to contact love ones are almost impossible if they can’t buy a phone card. These people suffer from having their dignity taken away and to keep having hope is a suffering that is deep into the soul. How anyone can live with themselves when they treat humanity like this.

To make matters more insulting is that these detention centers are a for private profit companies. They are paid for by our tax dollars. The more detainees the more money these corporations make.

My very soul weeps for these people who are suffering simply because they want a better life for themselves and for their children. Are we so cruel that we deprive these hard working people a life that our own very ancestors came for the same reason? I find this very shameful and extremely sad that we treat human beings in this manner.

Let us do what we can to alleviate this kind of activity in our country that is supposed to be noted for taking in the stranger. I too am very grateful for my community for allowing me to participate in this pilgrimage along with Sr. Jo Ann and the bus being provided by Veterans for Peace organization of Minneapolis. We all must work for justice and equality for all not just for a few.