The good news is that while I was in the United States last year, I met with people from Prairie Aqua Tech in Brookings. We agreed to participate in a research project together, in hopes they can double or triple the size of our fish in our ponds. I returned to Zambia three months earlier than planned, hoping to get this project underway by the end of January. 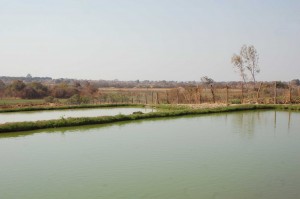 We hope to double or triple the size of thousands of fish in each of these ponds.

To date, by mid-March, we are no further ahead with this project than when I arrived in mid-January. With this article, I want to give you an example of why it takes so long to accomplish anything in Zambia.

This story started with some equipment and fish feed supplement from Prairie Aqua Tech that were sent to us via the Kids Against Hunger container. After three months, the container arrived in Lusaka. However, these special boxes of equipment and feed for our fishponds were delivered to Sister Deb in another part of Zambia, rather than being sent to me in Kaoma.

We thought this would be no problem. Sister Deb merely asked the truck driver to return the boxes to the trucking company in Lusaka and one of the sisters would pick them up from there. Sister Deb also sent the payment for the delivery with the driver. However, after three days, the trucker had not returned to the trucking office so he was arrested. The driver claimed he had no boxes and that Sister Deb had given the money to him for his personal use. I spent many hours on the phone with Sister Deb, the manager of the trucking company and the Lusaka police. Eventually the trucker’s story was straightened out, the money and boxes returned and four weeks later we finally had our boxes in Kaoma and were ready to begin.

At least, I thought we were ready to begin. It was then that I was told something was wrong with our fishnet; it was killing fish as they were caught. Because of this, I contacted Mr. Mutakwa, Director of the Western Province Fishery Department. He informed me that this net was to catch fish in the river and to kill them in the catch. Fortunately, he was going to Lusaka the next day and would purchase a net for us. So again, I thought we’d soon be ready to begin the project.

But not really! A net is purchased in parts and must be tied together, adding weights and floaters to the net. Mr. Mutakwa said he had asked two men to do the work for us and the net would be ready in three or four days. We scheduled the harvesting of the fish five different days, expecting the nets to be completed. Two weeks later, the nets are still not finished.

Last week, Mr. Mutakwa told me the nets would be ready by Monday for sure. When I called him Monday morning, he told me that he had Provincial Agricultural people from Lusaka visiting him and he would not be able to help us. We needed help from the Fishery to separate male and female fish. So we scheduled for Tuesday. Again on Tuesday, the visitors were still with him. Mr. Mutakwa promised that ‘nothing’ would prevent us from harvesting the fish the next day.

The water was lowered in the pond for Wednesday’s harvesting. I called Mr. Mutakwa to check on the time we would begin. His wife answered the phone and informed me her husband had been 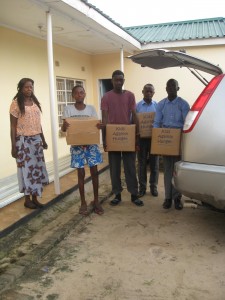 Distributing 100 boxes of Kids Against Hunger food to those most in need.

in a car accident the previous night and was in the hospital. He is now incapacitated with cracked ribs and pelvis.

I visited Mr. Mutakwa in the hospital. He told me not to worry. He would have some of the fishery people help us and if our net wasn’t ready, we could borrow one from the fishery. The end of the story is that our nets are not ready and the fishery’s net has been loaned to someone in another town.

We are still anxiously awaiting the opportunity to begin this exciting new project with Prairie Aqua Tech. Eventually, we will. Nothing ever happens quickly in Zambia. We do the best we can and try to be patient.

Since I mentioned the arrival of Kids Against Hunger food, I’ll just add a bit about how we will distribute the food this year. Last year, we gave food to about 15 schools, feeding thousands of children. However, they only received about eight meals over a period of two months.

This year, the rains came very late and those who planted early lost their maize, which they depend upon for food and for income. There are many people who are really hungry. It is important that people receive these packets of food on an ongoing basis if it is going to make any difference in their health. So the packets of food are now being given to those families most in need. We are continuing to give to schools, but rather than feed all the children several meals, packets of food are sent home each week with those children most in need, helping the entire family.

We greatly appreciate your prayers, encouragement and financial support to enable us to continue the work with the poor in our area. May God bless you.