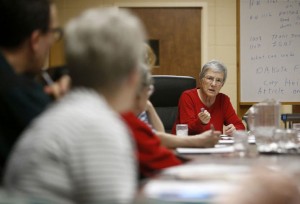 Pax Christi was born from a lack of peace activists around World War II.

The human life issues advocacy group started with French and German Catholics and was brought to the U.S. in 1972, according to Sister Pat Prunty with Presentation Sisters.

“We’ve had a group here maybe 12 years,” Prunty said. “We worked with the whole organization, and we didn’t have a local chapter until 2002.”

The group advocates for awareness on human trafficking, Medicaid expansion, the abolishment of the death penalty and more. It is against taxes it sees as affecting the most vulnerable members of society.

Members have come up with a very American, very tongue-in-cheek way to promote their causes with political leaders.

“We make pies and take them to (U.S. Sen. John) Thune, (U.S. Rep. Kristi) Noem and (U.S. Sen. Mike) Rounds and just ask for a piece of the national budget for peacemaking,” Prunty said. “It never makes any difference but, they enjoy the pie I guess. Apple – that’s usually what I make.”

At the group’s meeting Tuesday evening at the Presentation Convent, it was clear members take very seriously the issues that could most negatively affect those with low incomes, families, minorities, immigrants and youth. They respond by discussing the issues, making sure they understand them and working to reach some consensus on what stance to take and how to advocate for it.

“My community has two lobbyists with the Legislature,” Prunty said. “They usually give us reports.”

“It seems ironic that those who seek to have less government are advocating for more,” Patrick Harford, a Redfield teacher, said about the latter issue.

House Bill 1008 — which would require public school students to use restrooms and locker rooms that match their biological sex rather than the gender with which they identify — has passed the state House and Senate and is currently awaiting action from Gov. Dennis Daugaard.

The organization is faith-based. Sister Myra Remily explained that one needs to hold onto his or her faith in other aspects of life, that it should be a guiding force.

“What would Jesus do? Say go to the Pharisees, have them check you out, and then I’ll heal you?” Sister Consuelo Covarrubias asked.

She was talking about a bill that would have mandated drug testing to Temporary Assistance for Needy Families recipients. The measure failed in the House in late January.

Members diligently write letters or send emails to legislators on topics they feel are important. They also write many letters to the editor.

“It keeps the issues before the public, and hopefully it changes some minds,” Prunty said.

The group generally meets the last Tuesday of each month and takes May, June and July off. Many in the group are Presentation sisters, but others are welcome. 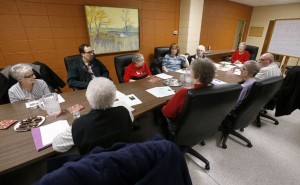 “Anybody can belong. We’d like more people to come,” Prunty said.

• Generally meets at 7 p.m. the last Tuesday of the month, except May, June and July

• Meetings are at the Presentation Convent