Why Cap Payday Loan Interest Rates at 36 Per Cent? 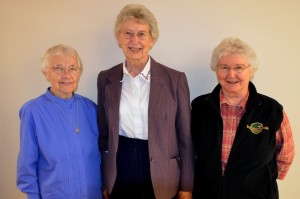 Presentation Sisters, Cojourners and Pax Christi members have joined “SOUTH DAKOTANS FOR RESPONSIBLE LIVING” (SDFRL) led by Steve Hildebrand from Josiah’s Restaurant in Sioux Falls. Enough signatures have been gathered for this initiative to be placed on the ballot in November 2016 capping interest rates for all payday loans at 36%.

Unfortunately, big business is behind another initiative that will appear on the ballot that deceives people into thinking that their initiative is fairer, because they want interest rates capped at 18%. This 36% payday loan cap would actually cement the possibility of sky-high interest rates in the SD constitution. SDFRL is facing an uphill battle. It is much like a David and Goliath dynamic that is playing out. Pay day lending is a $46 billion industry in the U.S. It is interesting that the company (Select Management Resources LLC based in Georgia) was sole financer in 2015 of South Dakotans for Fair Lending, the political committee pushing for an amendment to cap rates at 18%, but allowing any rate that the borrower agrees to, has auto title locations in SD under the name North American Title Loan.

About 12 million Americans borrow more than $7 billion annually from over 22,000 storefronts. SDFRL is fighting the debt trap of triple-digit interest rate payday loans. In South Dakota alone, the average interest rate is 574% for a payday loan! It is time to CAP THE INTEREST RATES. Many who borrow from these storefront lenders are already living paycheck to paycheck. For example, one family took out a $1,200 loan from a payday lender. They needed to pay $322/month for a year. It turned out that they were paying more than 300% annually. Many need a second loan to pay off the first loan, which is called flipping. On average, borrowers “flip” eight times.

The Hebrew Scriptures give preferential option for those made poor. The Israelites were forbidden from charging “usury,” or interest, on loans to fellow Jews (Deuteronomy 23:19). In January 2015, Pope Francis claimed that high interest loans are an affront to the dignity of the human person: ““When a family has nothing to eat, because it has to make payments to usurers, this is not Christian, it is not human! This dramatic scourge in our society harms the inviolable dignity of the human person.”

Payday lending practices as we know them today are unjust, take advantage of the plight of those made poor by the very system that continues to keep them trapped in a vicious cycle of poverty! Please study this issue throughout the year because in November, there will be two ballot initiatives. Choose LIFE!