“There is an urgent need to work for a world free of nuclear weapons, in full application of the Non-Proliferation Treaty, in letter and spirit, with the goal of a complete prohibition of these weapons.”
Pope Francis inspired us at the United Nations, September 25, 2015 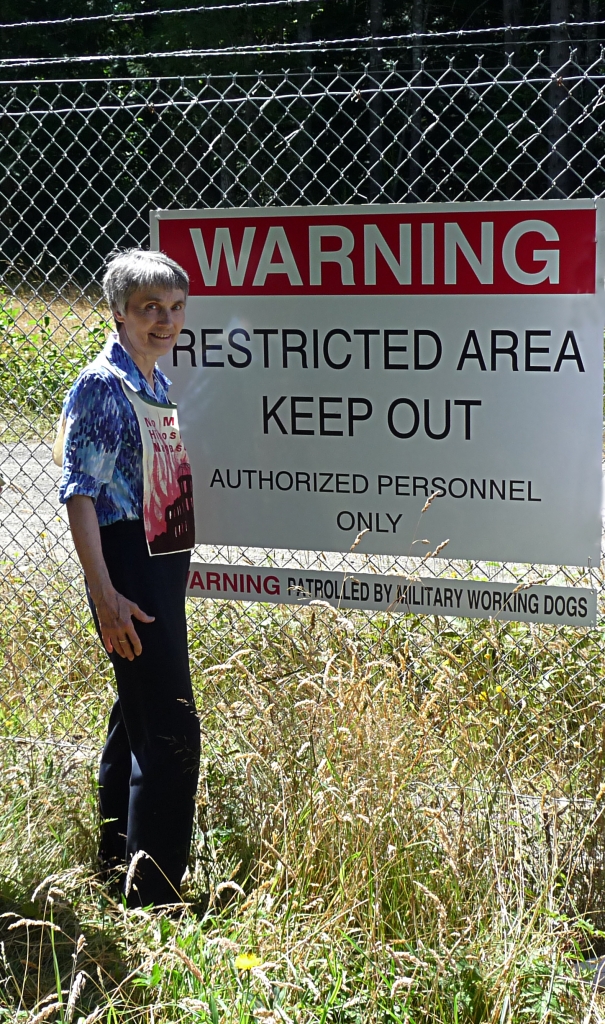 In 1984 our Presentation Sisters, Aberdeen, SD, made this corporate statement: “We are women who value life as a sacred gift of our Creator. Nuclear weapons threaten to destroy life. Moreover, available resources which could be used to free the poor from oppression are now being allocated for the building of nuclear weapons…(We) believe we are morally obligated to oppose the possession of nuclear weapons.

Our Social Justice Team continues to work toward the abolition of nuclear weapons. We engaged speakers for our annual SD Pax Christi conferences to address this issue including Ralph Hutchison and Sister Mary Dennis Lentsch, Oak Ridge Environmental Alliance. Archbishop Hunthausen’s Reflection on Faith and Disarmament was delivered in a dramatic portrayal. Greg Boertje-Obed, Michael Walli and Sister Megan Rice presented “Ongoing Resistance to Nuclear Weapons and War” and spoke of their imprisonment for infiltrating the Y-12 National Security Complex. (see Almighty by Dan Zak)

Sister Lentsch, Dubuque Presentation Sister, who has been actively resisting nuclear proliferation since the early 1980’s inspires us:  “My heartfelt conviction is reinforced by this Bible passage: ‘I have set before you life and death, the blessing and the curse. Choose life that you and future generations may live.’ (Dueteronomy 30:19) “I have experienced the hardship of jail and prison where I was sustained by the loving embrace of our good and gracious God. I was supported by love and care from my family, Presentation Sisters and many faithful friends.

“The United States plans to spend $1 trillion over the next 30 years to ‘modernize’ all aspects of its nuclear arsenal. This means investing four million dollars an hour for the next 30 years to build instruments of death and massive destruction. Instead of producing more nuclear weapons, we can still provide jobs to dismantle the old unusable bombs.”

We have visited Ground Zero Center for Nonviolent Action  and worked with Leonard Eiger, Coordinator. For forty years the Center has resisted the Trident nuclear weapons system through the study and practice of nonviolence. Ground Zero is building a campaign, NO To NEW TRIDENT  to stop the Navy’s plans to build a new fleet of twelve Trident submarines. New Trident will be a major driver of a new, rapidly developing arms race that threatens humanity with nuclear annihilation. NO To NEW TRIDENT!

Hearing the Hibakusha (survivors of the atomic bomb) share their heart-rending experiences at the 2010 NPT Review at the United Nations only deepened our commitment to speak out.   Archbishop Joseph Mitsuaki Takami of Nagasaki said: “The message of Mary is to tell the people of the world of the absurdity and foolishness of our militarization and nuclear weapons.” Then he shared the atomic-bombed statue of the seared head of Mary from Nagasaki’s Cathedral.

John Dear spoke at our SD Pax Christi conference this year on the Mission of Gospel Nonviolence and reminds us “to speak out, organize and mobilize for a world without war…nuclear weapons..for the coming of God’s reign of peace and nonviolence on earth.” Scott Wright and Art Laffin (Pax Christi USA) inspired us with an Apology Petition to the people of Japan (August 6-9, 2015).

“We ask forgiveness for these atrocities… We offer repentance for threatening to use nuclear weapons…We renew our commitment to the biblical vison of peace, a world without weapons or war… ‘They will beat their swords into plowshares, and their spears into pruning hooks. Nation shall not raise sword against nation; nor will they train for war anymore.’ (IS 2:4)”