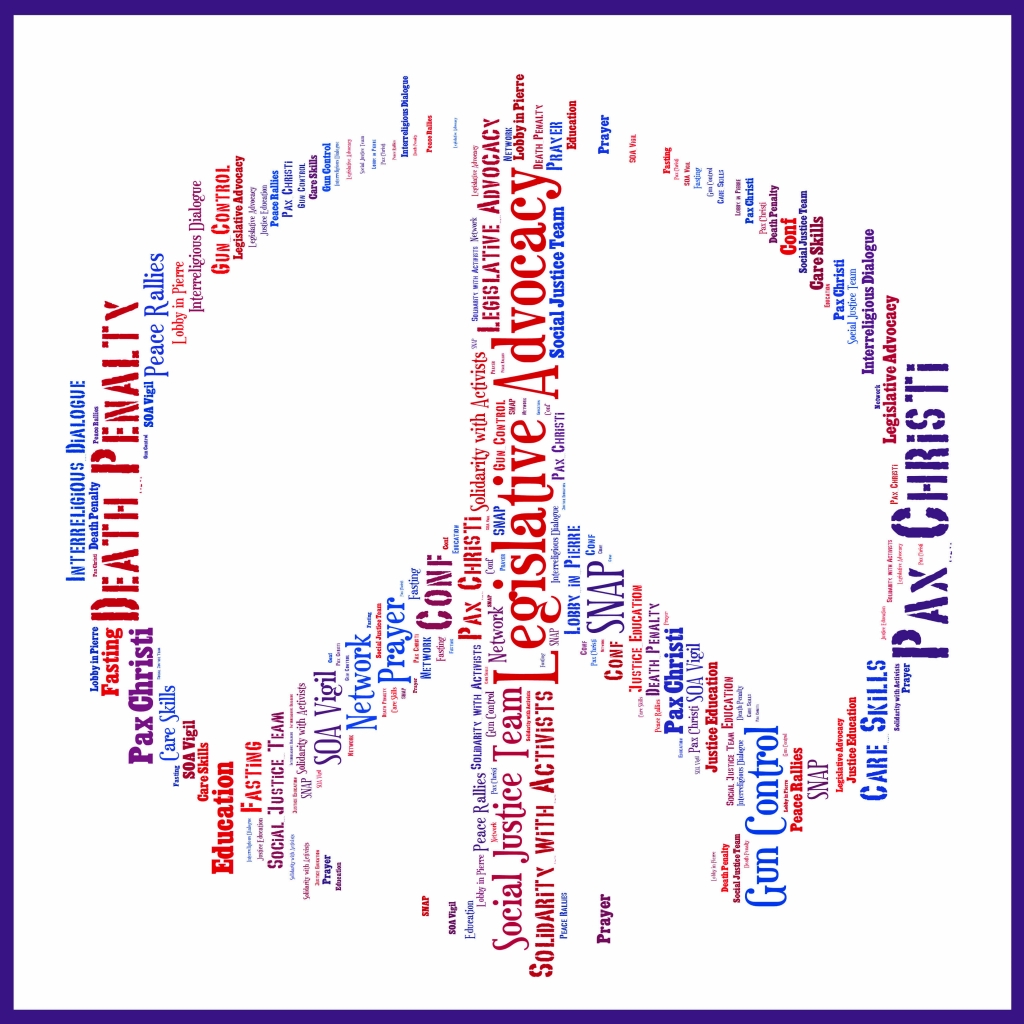 Today, Pope Francis released the annual World Day of Peace Message for January 1, 2017, called “Nonviolence—A Style of Politics for Peace.” This is the Vatican’s fiftieth World Day of Peace message, but it’s the first statement on nonviolence, in the tradition of Mahatma Gandhi and Dr. Martin Luther King, Jr.—in history.

We need to make “active nonviolence our way of life,” Francis writes at the start, and suggests nonviolence become our new style of politics. “I ask God to help all of us to cultivate nonviolence in our most personal thoughts and values,” Francis writes. “May charity and nonviolence govern how we treat each other as individuals, within society and in international life.  When victims of violence are able to resist the temptation to retaliate, they become the most credible promotors of nonviolent peacemaking.  In the most local and ordinary situations and in the international order, may nonviolence become the hallmark of our decisions, our relationships and our actions, and indeed of political life in all its forms.”

In his historic statement, Pope Francis discusses the violence of the world, Jesus’ way of nonviolence, and the viable alternative of nonviolence for today. His message is a breath of fresh air for all of us, and offers a framework for all of us to envision our lives and our world.

“Violence Is Not the Cure for a Broken World”

“Today, sadly, we find ourselves engaged in a horrifying world war fought piecemeal,” Francis writes. “It is not easy to know if our world is presently more or less violent than in the past, or to know whether modern means of communications and greater mobility have made us more aware of violence, or, on the other hand, increasingly inured to it.  In any case, we know that this ‘piecemeal’ violence, of different kinds and levels, causes great suffering: wars in different countries and continents; terrorism, organized crime and unforeseen acts of violence; the abuses suffered by migrants and victims of human trafficking; and the devastation of the environment.  Where does this lead?  Can violence achieve any goal of lasting value?  Or does it merely lead to retaliation and a cycle of deadly conflicts that benefit only a few ‘warlords’?”

“Countering violence with violence leads at best to forced migrations and enormous suffering,” Francis continues, “because vast amounts of resources are diverted to military ends and away from the everyday needs of young people, families experiencing hardship, the elderly, the infirm and the great majority of people in our world.  At worst, it can lead to the death, physical and spiritual, of many people, if not of all.”

Practicing the Nonviolence of Jesus

Jesus lived and taught nonviolence, which Francis calls “a radically positive approach.” Jesus “unfailingly preached God’s unconditional love, which welcomes and forgives.  He taught his disciples to love their enemies (cf. Mt 5:44) and to turn the other cheek (cf. Mt 5:39).  When he stopped her accusers from stoning the woman caught in adultery (cf. Jn 8:1-11), and when, on the night before he died, he told Peter to put away his sword (cf. Mt 26:52), Jesus marked out the path of nonviolence.  He walked that path to the very end, to the cross, whereby he became our peace and put an end to hostility (cf. Eph 2:14-16).  Whoever accepts the Good News of Jesus is able to acknowledge the violence within and be healed by God’s mercy, becoming in turn an instrument of reconciliation.”

“To be true followers of Jesus today also includes embracing his teaching about nonviolence,” Francis writes. He quotes Pope Benedict who said that the command to love our enemies “is the magna carta of Christian nonviolence. It does not consist in succumbing to evil…, but in responding to evil with good and thereby breaking the chain of injustice.”

Nonviolence Is More Powerful than Violence

“The decisive and consistent practice of nonviolence has produced impressive results,” Francis explains. “The achievements of Mahatma Gandhi and Khan Abdul Ghaffar Khan in the liberation of India, and of Dr. Martin Luther King Jr in combating racial discrimination will never be forgotten.  Women in particular are often leaders of nonviolence, as for example, was Leymah Gbowee and the thousands of Liberian women, who organized pray-ins and nonviolent protest that resulted in high-level peace talks to end the second civil war in Liberia. The Church has been involved in nonviolent peacebuilding strategies in many countries, engaging even the most violent parties in efforts to build a just and lasting peace. Let us never tire of repeating: ‘The name of God cannot be used to justify violence.  Peace alone is holy.  Peace alone is holy, not war!’

“If violence has its source in the human heart, then it is fundamental that nonviolence be practiced within families,” Francis writes. “I plead with equal urgency for an end to domestic violence and to the abuse of women and children. The politics of nonviolence have to begin in the home and then spread to the entire human family.”

“An ethics of fraternity and peaceful coexistence between individuals and among peoples cannot be based on the logic of fear, violence and closed-mindedness, but on responsibility, respect and sincere dialogue,” Francis continues. “I plead for disarmament and for the prohibition and abolition of nuclear weapons: nuclear deterrence and the threat of mutual assured destruction are incapable of grounding such an ethics.”

The Vatican Conference on Nonviolence

Last April eighty of us from around the world met for three days at the Vatican to discuss Jesus and nonviolence with Vatican officials, and ask the Pope to write a new encyclical on nonviolence. Our meetings were very positive and constructive. While there, our host Cardinal Turkson, head of the Pontifical Office of Justice and Peace, asked me to write a draft of the 2017 World Day of Peace on nonviolence for Pope Francis. I sent in a draft, as did my friends Ken Butigan, Marie Dennis and the leadership of Pax Christi International. We are glad to see our main points, even some of our exact language, in today’s message.

Next week, we go back to Rome for more meetings on the possibility of an encyclical on nonviolence. We won’t know if Pope Francis himself will receive us until the day of our first meeting, but we are hoping it will happen. We are going to encourage the Vatican to reject the just war theory once and for all, fully embrace Jesus’ methodology of nonviolence, and make nonviolence mandatory throughout the global Church.

“Peacebuilding through active nonviolence is the natural and necessary complement to the Church’s continuing efforts to limit the use of force by the application of moral norms,” Francis concludes. “Jesus himself offers a ‘manual’ for this strategy of peacemaking in the Sermon on the Mount.  The eight Beatitudes (cf. Mt 5:3-10) provide a portrait of the person we could describe as blessed, good and authentic.  Blessed are the meek, Jesus tells us, the merciful and the peacemakers, those who are pure in heart, and those who hunger and thirst for justice. This is also a program and a challenge for political and religious leaders, the heads of international institutions, and business and media executives: to apply the Beatitudes in the exercise of their respective responsibilities.  It is a challenge to build up society, communities and businesses by acting as peacemakers.  It is to show mercy by refusing to discard people, harm the environment, or seek to win at any cost.  To do so requires ‘the willingness to face conflict head on, to resolve it and to make it a link in the chain of a new process.’   To act in this way means to choose solidarity as a way of making history and building friendship in society.”

His concluding words should be a source of consolation as well as a challenge for us in the days ahead:

Active nonviolence is a way of showing that unity is truly more powerful and more fruitful than conflict.  Everything in the world is inter-connected. Differences can cause frictions, but let us face them constructively and non-violently.

I pledge the assistance of the Church in every effort to build peace through active and creative nonviolence. Every such response, however modest, helps to build a world free of violence, the first step towards justice and peace. In 2017, may we dedicate ourselves prayerfully and actively to banishing violence from our hearts, words and deeds, and to becoming nonviolent people and to build nonviolent communities that care for our common home.

As we prepare for years of resistance to come, I hope we can take heart from Pope Francis’ global call for nonviolence, help spread his message, and do our part to become nonviolent people, build the global grassroots movement of nonviolence, and uphold the vision of a new world of nonviolence.